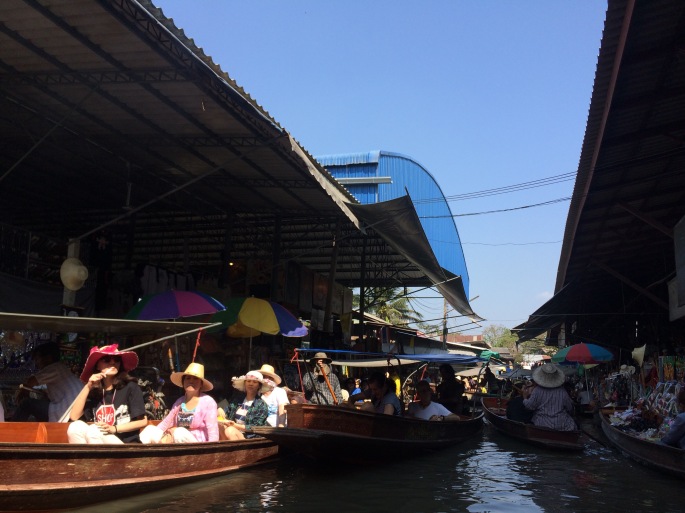 As if the various markets going on all around the city were not enough, decided to check out a real special one. A market on the river.
After a two hours drive from Bangkok we reached this very touristy, but yet so authentic floating market, called Damnoen Saduak floating market.

The bus drive there is way longer than spending time at the market itself, but it does worth the travel. More or less in an organized way – Thai standards – the tour guide directs us first of all to the long tail boat and in each boat board aprox 6 people. Off we go! Not more, maybe just less than 10 minutes of long tail boat ride and we had a sneak peak of the market. But that’s not all. 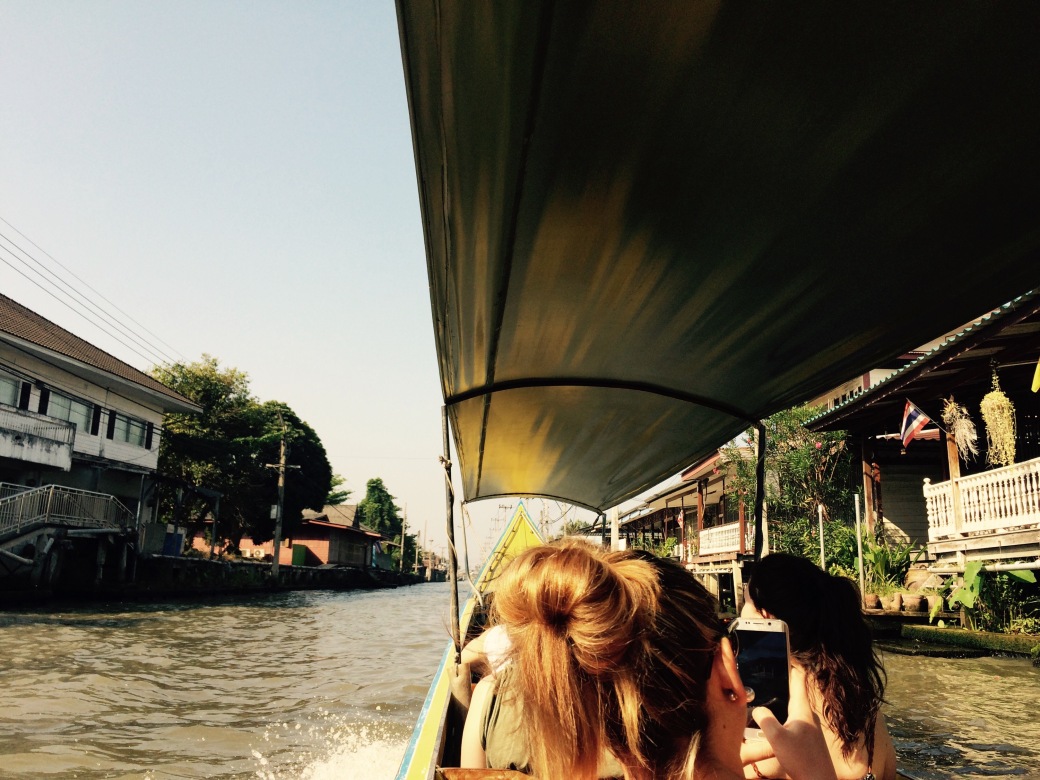 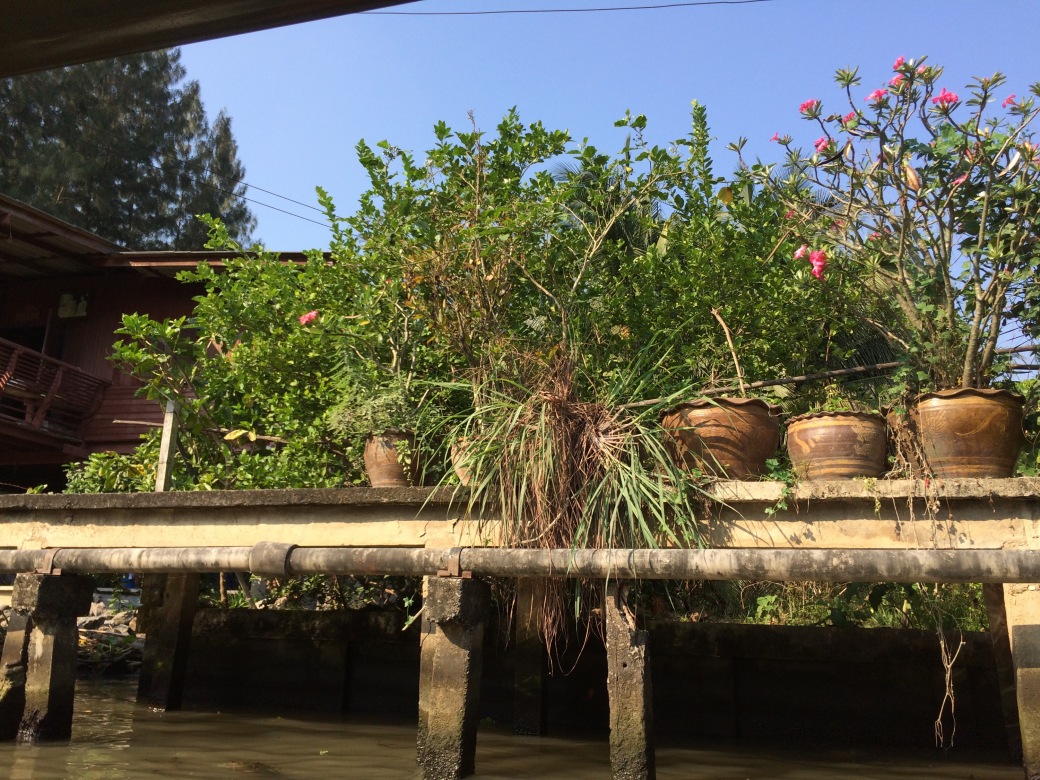 Those people put out all their products to be sold and they definitely know to advertise them. In order to have a close look and literally float between “boat boutiques” we take this time a regular boat that a strong Thai gentleman is rowing around trying to avoid the boat traffic.

That’s nearly impossible though, all the others trying to do the same thing. Boats everywhere, we are being pushed either from the right or from the left ,but also from front and back and our boat does the same thing to the others . Perfect location for socializing with people from the other boats.

As soon as we get close to a boat full of souvenirs the seller quickly pulls the boat closer and the bargain starts.

And that’s how my friend, Jonas ended up buying his souvenirs for much much less than the initial price. Basically they accept any price you offer as long as you don’t give up on bargaining. When you give the impression that you are losing the interest they will accept your price instantly.

The floating market is going on all day long, 7 days out of 7 and if you haven’t found what you’ve been looking for on the boats, there’s a chance to find it on the riverside.

From clothes to souvenirs, the selection is vague.

You can easily empty your wallet, but fill your stomach. Food is present in several locations, great cooked meals or easy snacks and fruit salads, mango or coconut ice cream and my favorite of all: pancakes.

There is also an unusual attraction that I got the chance to meet from close and despite his scary behaviour , I enjoyed posing with the massive snake. 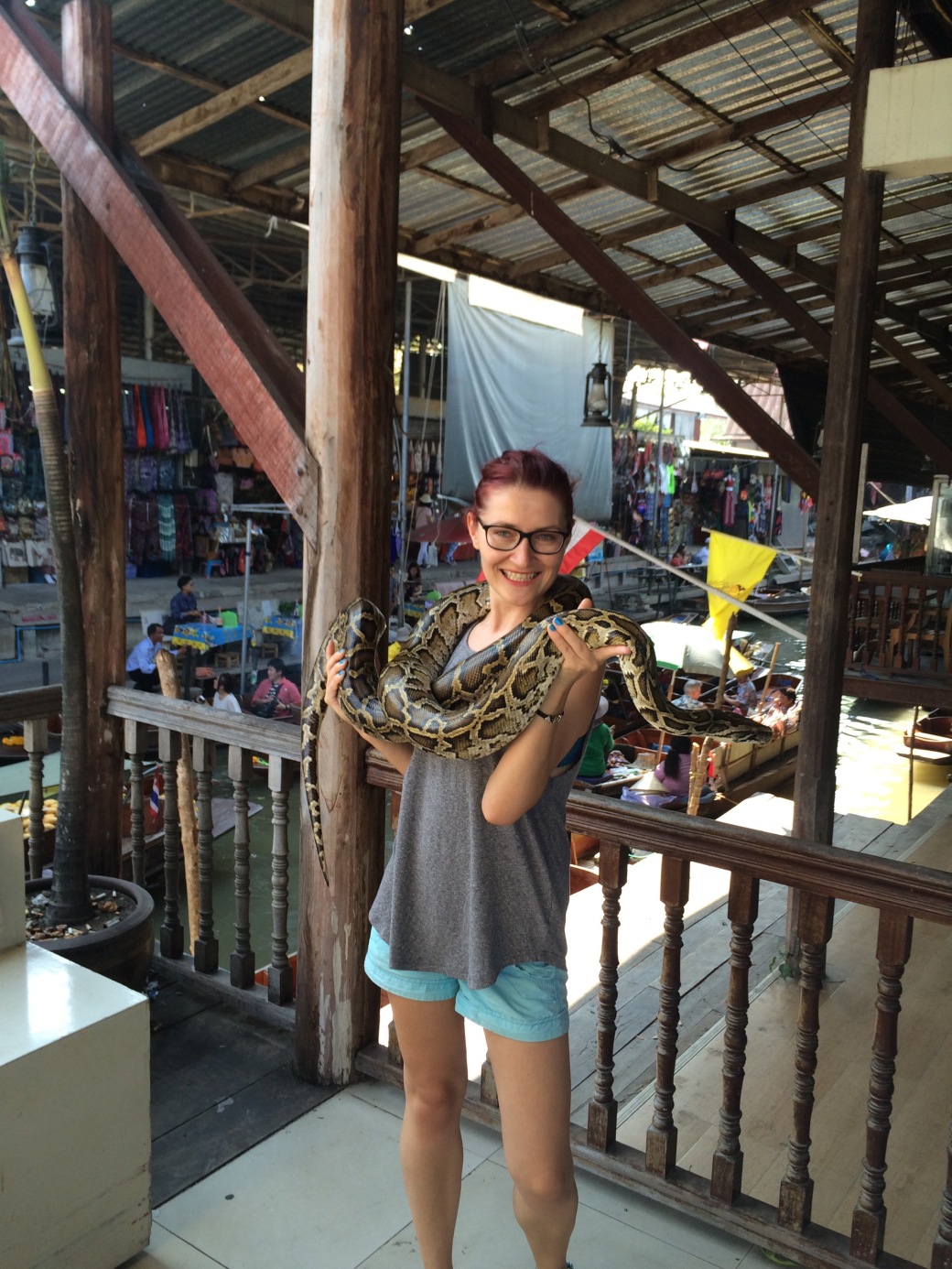 Shopping, eating, snake cuddling, all possible at the floating market! Don’t forget sunscreen and hat, the sun is burning over there! But if you did forget, for sure you’ll find at the market! One rule: bargain rules!

I’m a first timer in the Thai capital and as expected, the adventure comes together with a bit of a cultural shock. Not as much the first evening , when I land and surprisingly the taxi driver doesn’t charge me double or triple fare. The boom is the next day, when I hit the road to explore this new city. What other way to feel the real lifestyle than riding a local bus? Now that’s gonna be a bit of an adventure!

What air condition, what ticket machine, what station announcement or punctuality? Not even rules, but still as chaotic as you could imagine the traffic – and frankly there’s quite a bit of a chaos – after a while I realize that I haven’t heard any honking or fights, that makes me think that those people must be having their order in the big disorder that I see.

However, the bus ride is endless, takes ages and people around me are sweating but with lots of patience and water you can survive it and it’s actually fun. Not many tourists opt for the local bus, so apparently I’m a bit of attraction for the locals, who give me shy smiles when getting on and off. 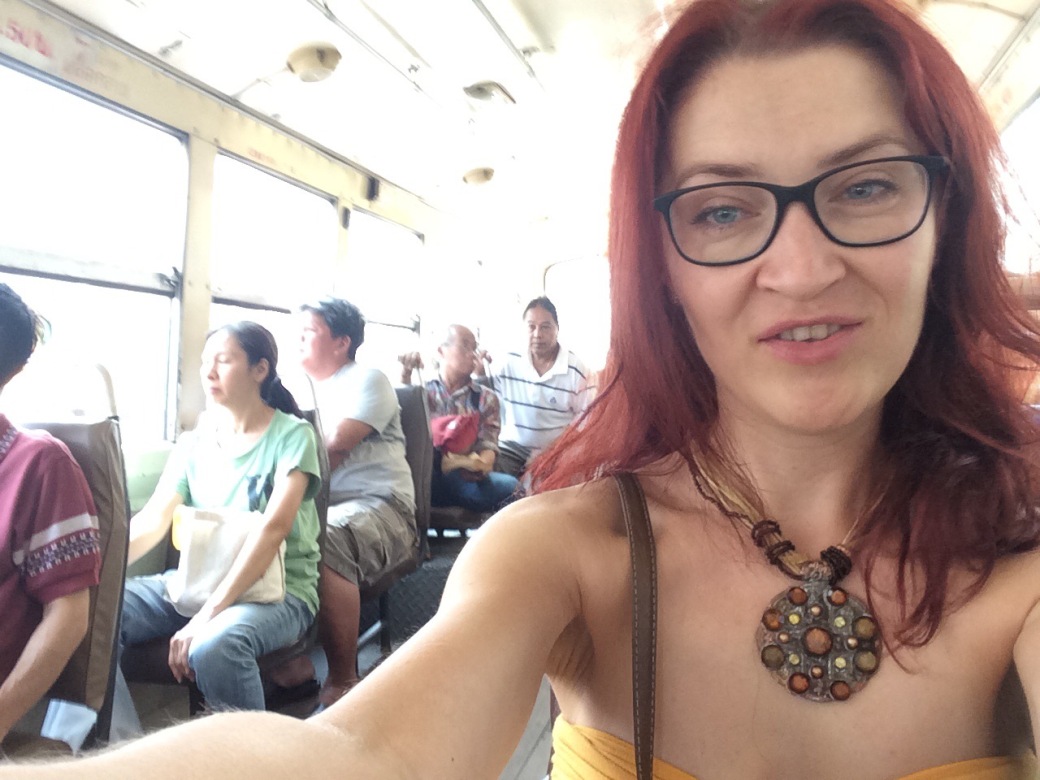 I was curious to see a market that everybody has been talking about, but that didn’t impress me. Unless you are after cheap and not good quality products it’s a place to be, if you need good stuff better you go to a shopping mall I guess. In any case, checking out a market it’s one of the top things to do in Bangkok. The variety is huge: night market, day market, weekend market, food market and the list could continue. 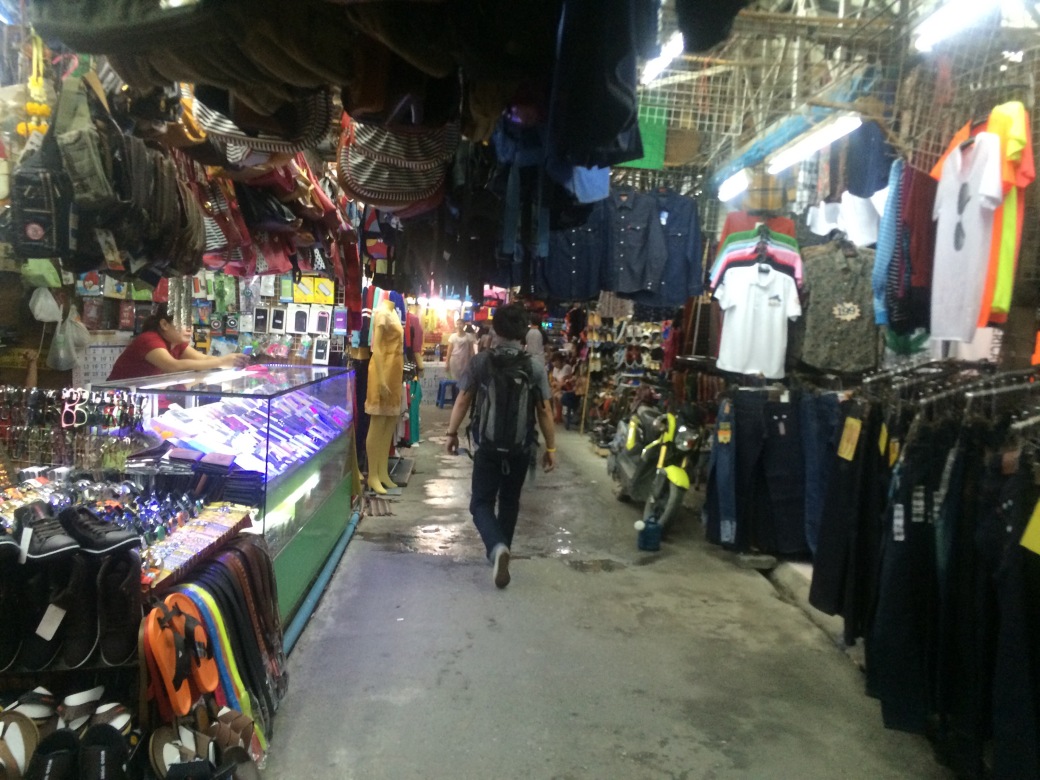 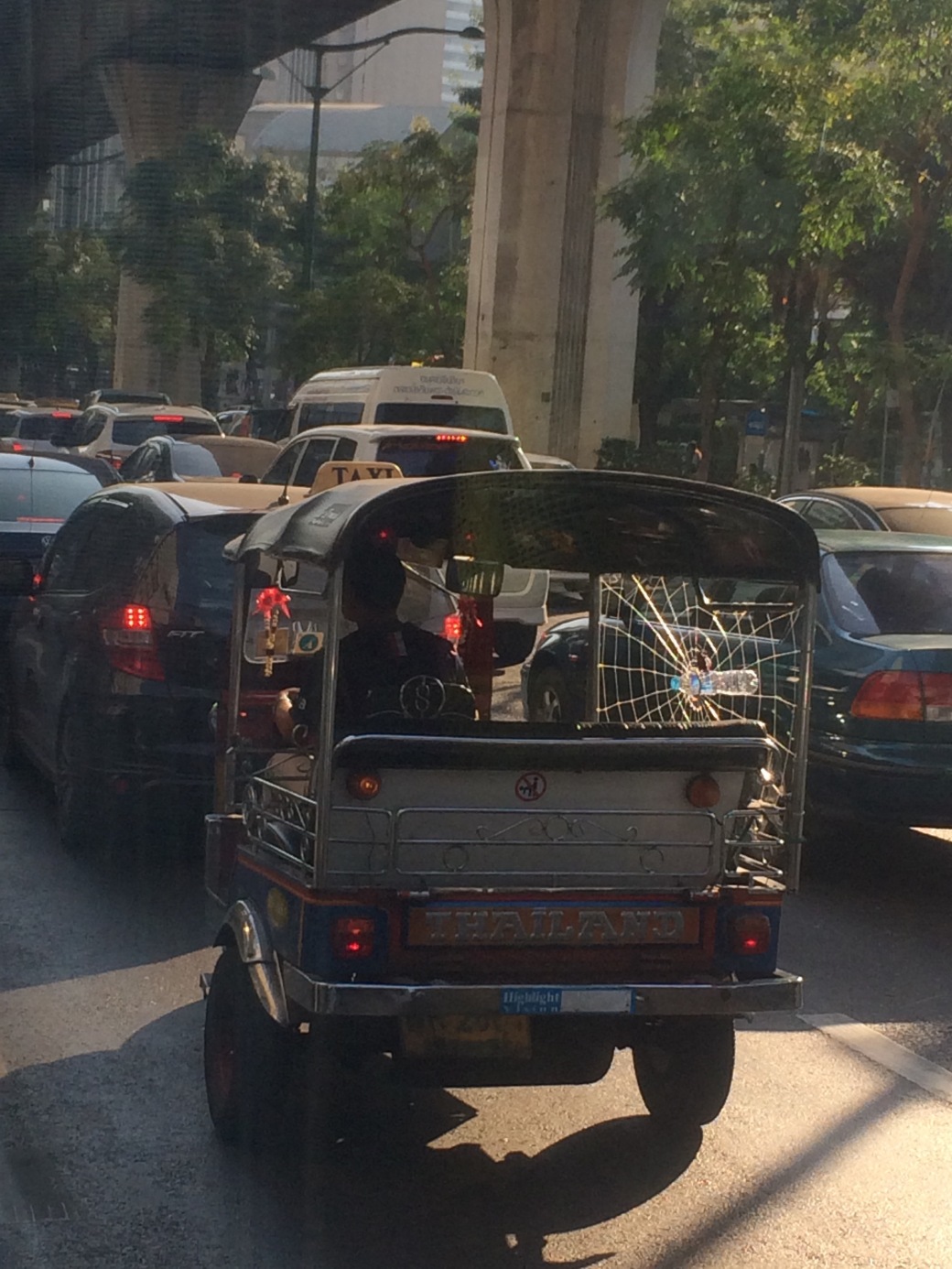 They all try to attract you to their tuk tuk and so kindly offer you the magnificent best price, which at first will be at least the double of the normal fare. Bargaining has never been my thing but I quickly improved my skills in such environment and proudly rode the tuk tuk around the city.

The cheapest way to get around is still the taxi – cause riding the local bus is enough once – and it has air condition!

As European ( and probably every other nation than Asian ) getting a lot of attention, compliments and smiles from all around becomes usual after a while when you just ignore it automatically because otherwise it’s just way too much to handle. Maybe it’s because it’s Valentine’s Day and you are solo in a park?! I don’t know…, but I don’t think I remember any other day of my life feeling so admired. Hilarious! 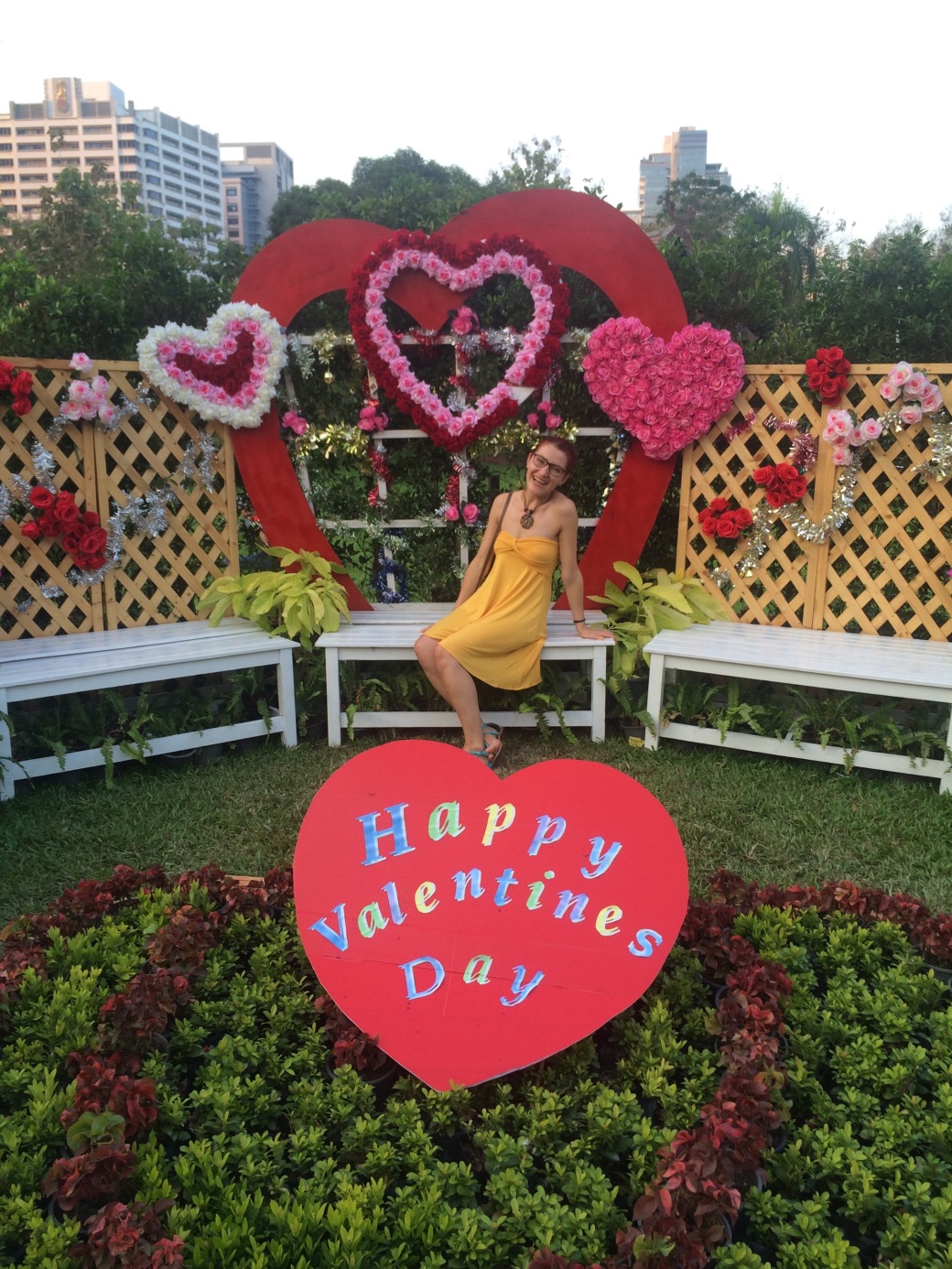 Also, you wouldn’t expect Asians celebrating love in such an intense way! I spotted dozens of romantic pals driving their scooter towards their partner with flowers, gifts or heart shaped balloons in hands. Love is in the air in Bangkok!

From my side all the love goes to the food and the marvelous pancakes I got the chance to eat every single day in Bangkok and later on in several other places in Thailand. Simply delicious and insanely cheap ! Also the street food is safe to eat, just adviseable to have a look from where you buy it. I’ve seen a few places where I wouldn’t have eaten for sure. 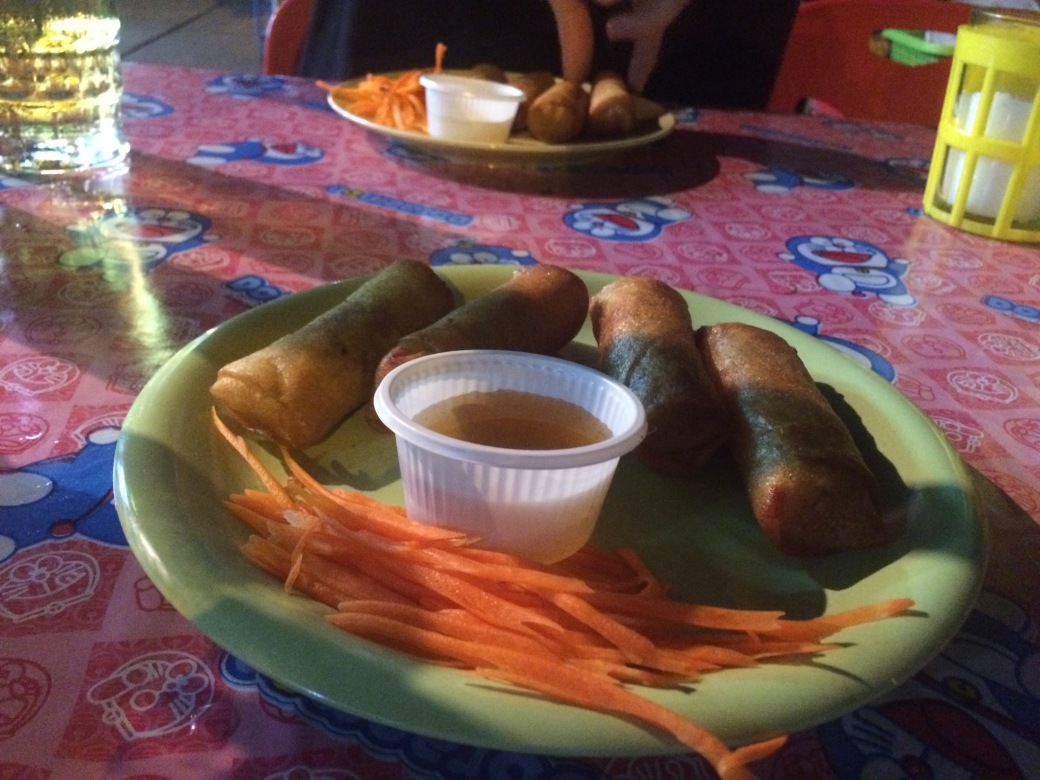 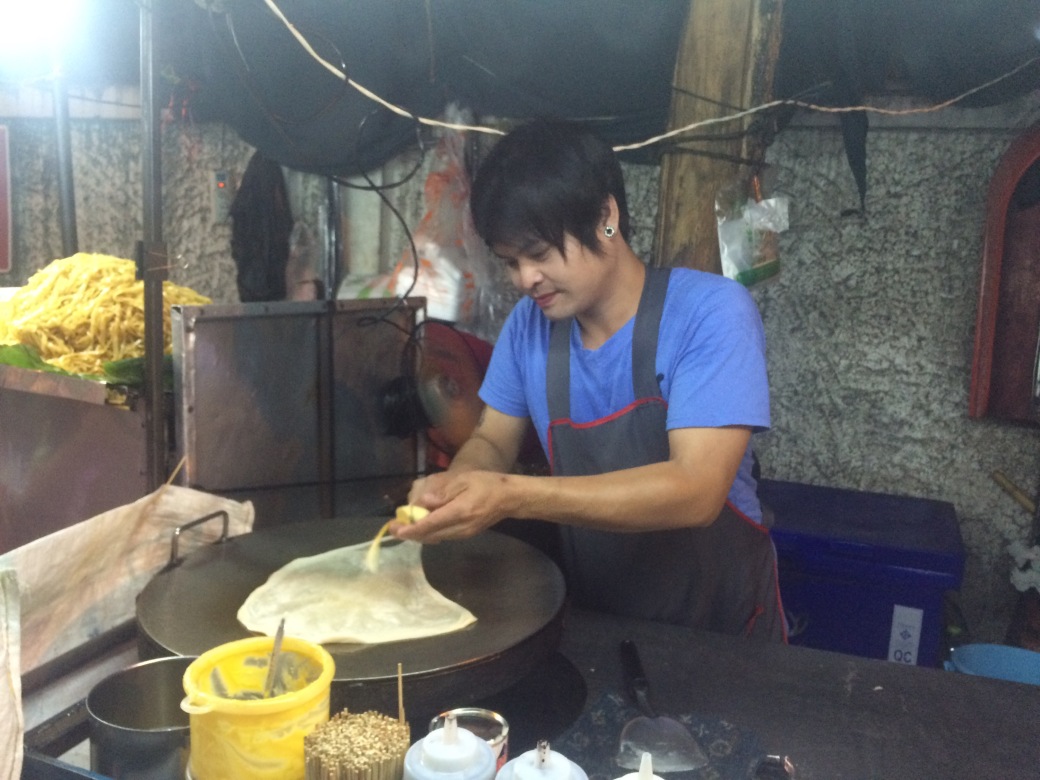 That’s Bangkok: everything happens just a step away from the busy traffic, on the street they cook and serve your meal, exchange your money, make your pedicure and offer you a massage. 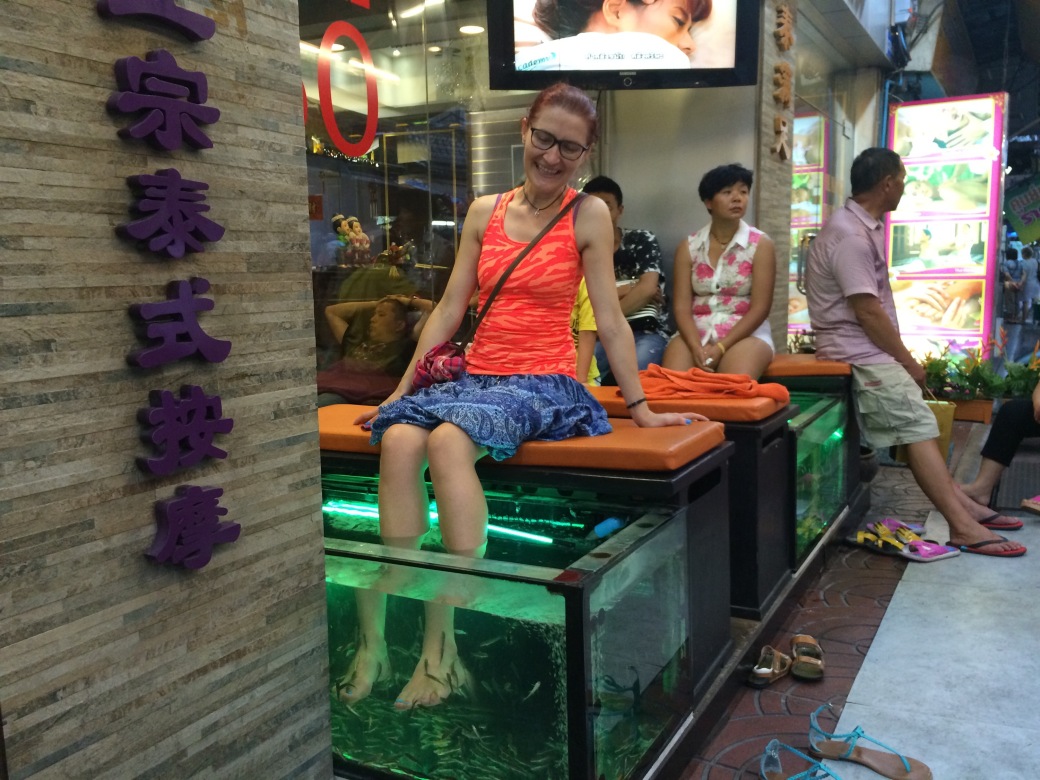 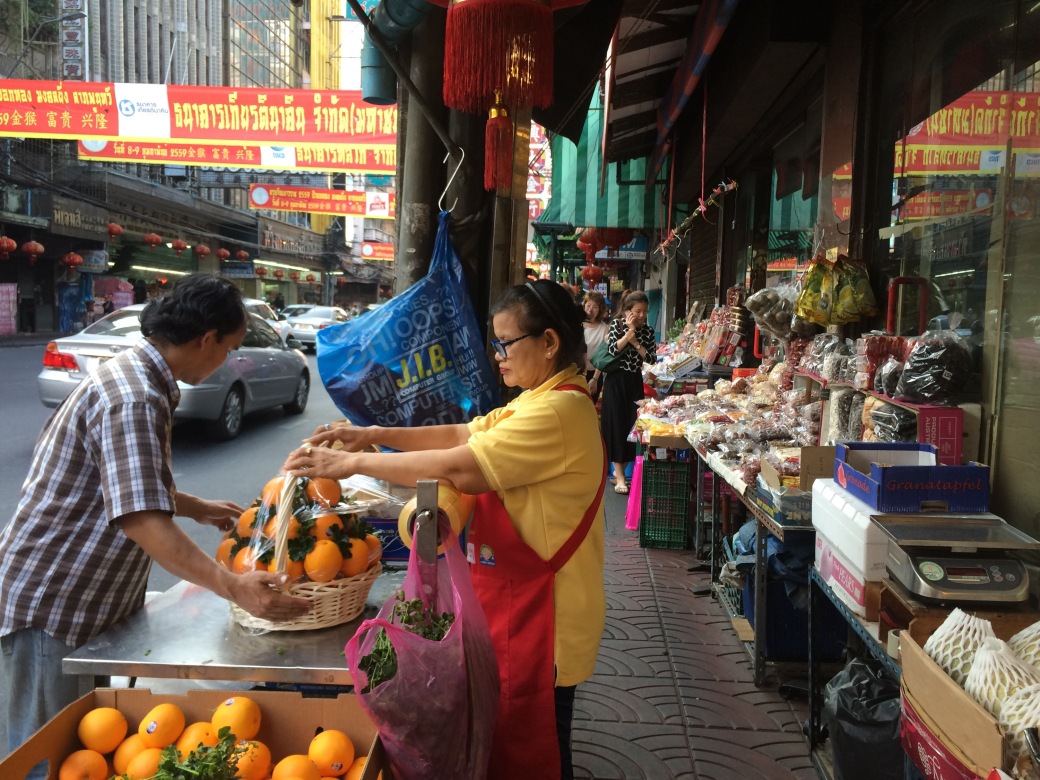 Khaosan road, Silam and Chinatown are great examples for that and definitely must see spots while in Bangkok. 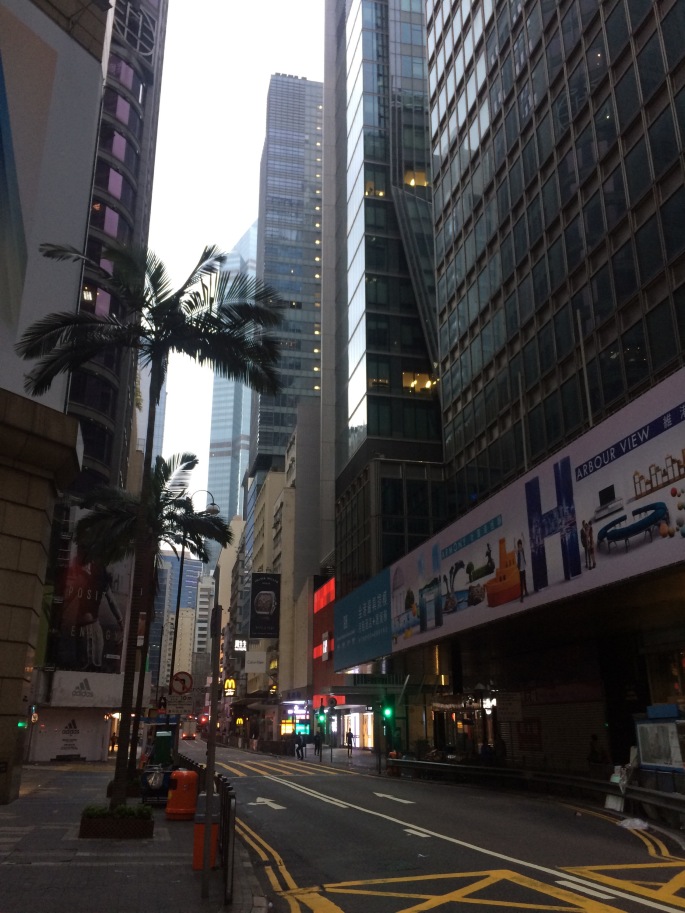 When it comes to Hong Kong I doubt that someone would bring up the word: silent. For this reason now, when I look back I am so greatful that my plane landed at 6 am in this marvelous city. That meant I started my 10 hours layover very early, at 7 am on a Saturday morning wandering on the usually crowded streets of Hong Kong almost all by myself. I got the chance of experiencing a silent city, which was covered up with the previous nights party’s remains – those were not the most pleasant things to see, I have to admit that.

The pleasant part though was present: watching how the city comes to life again.

As I walk around the tempreture is remarkably rising, the humidity is high and even if it’s still early morning and I can’t even spot the sun, I can feel that it’s gonna be another hot day. The typical Asian attention and admiration is impossible to not notice, as polite and kind they are, the way they stare at me – I’m not Asian looking so they check well the differences and they are not really diplomatic at it – is slightly disturbing after a while, considering that I’m dealing also with a nasty jetlag. However, I just instinctively ignore the deep looks and go on exploring and discovering the city by the Star Ferry, which takes me to Kowloon, the part of the city that I found super exciting . 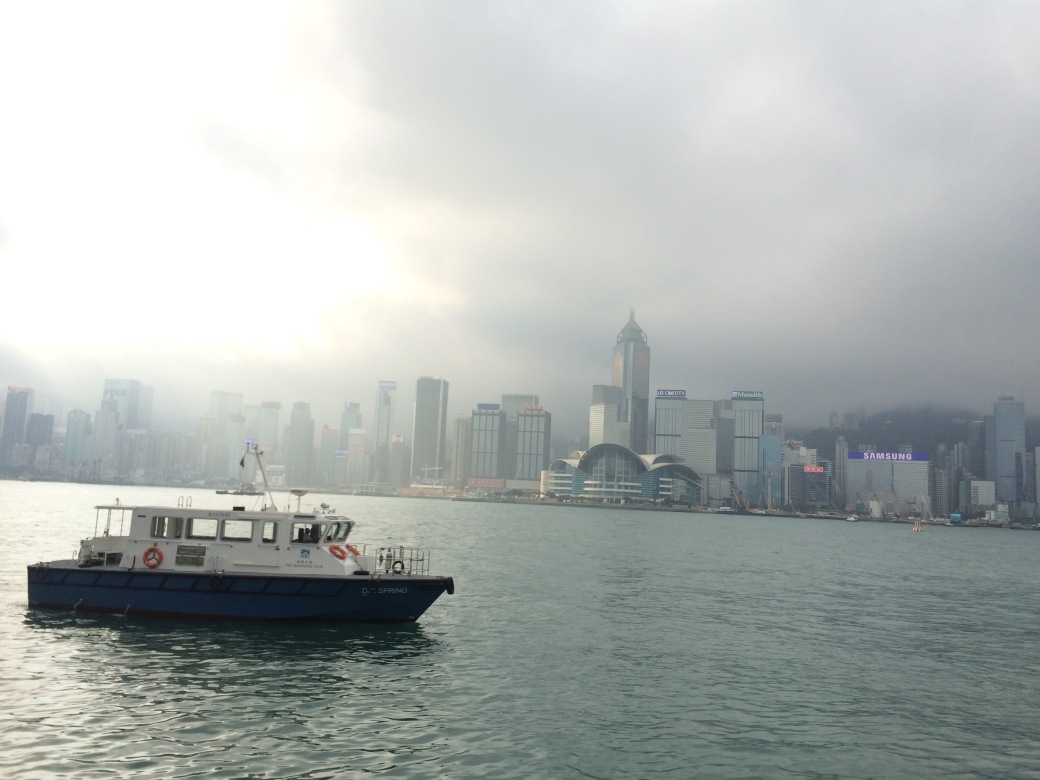 Victoria Harbour is fascinating and walking around is simply relaxing and refreshing. If you want to escape the real world you can always pop in the Space Museum, where I assume you meet a few more similar pals of the little green man. 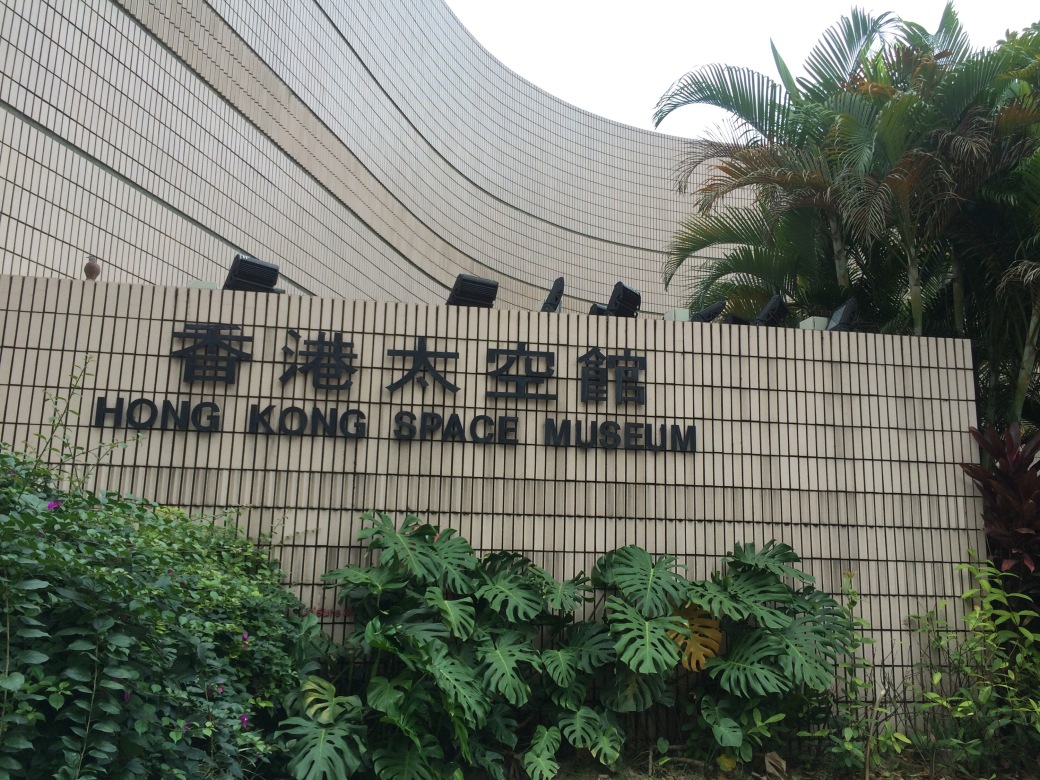 Further down you meet significant people from our planet, well, I mean celebrities of Hong Kong, more precisely statues of them at the Garden of Stars.

As we are all special and significant too, at least let me believe so, you’ve got the necessary setting to feel like a film start shooting the movie of your carier right now right here. 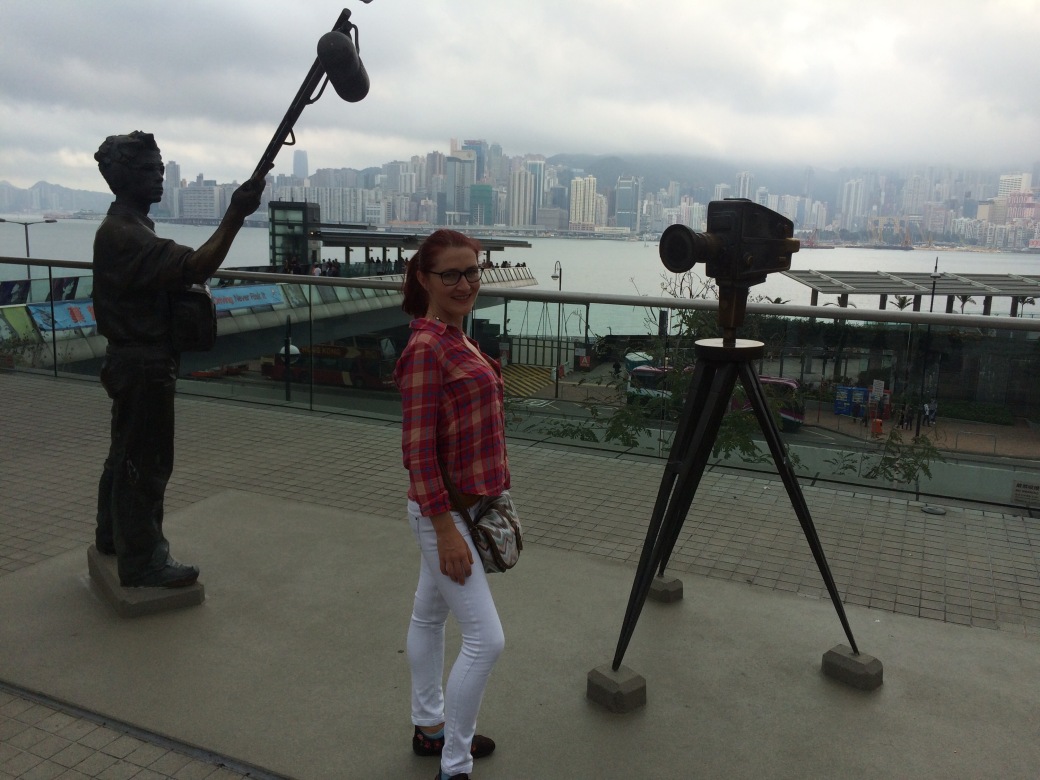 Obviously after meeting space creatures and celebrities, feeling both star – thanks to all the eyes pointed at you because of your non-Asian look- and space creature – dizziness that comes with jetlag seriously feels like having your head in the space spinning round and round – a walk in a park it’s necessary, especially when the entry looks so welcoming.

A well deserved chill time is indeed possible right when Hong Kong became the busy city I had imagined. Life is running in faster rythm outside of the park, but inside it’s all about relax, quiet, people chilling and stretching.

In the city of Hong Kong I met the unexpected diversity of dragons, refreshing and silent nature just around the corner from the busy shopping districts and kindness and polite attitude of the locals.

This is how a good trip starts after all…